I am a happy and proud owner of a Wii U and so far I've enjoyed Nintendoland, ZombieU and COD: Black ops 2 very much on Nintendo's newest console but I've been wanting more reasons to turn on that console. The Nintendo booth at PAX East 2013 gave me a few reasons, in this case 101 reasons.


There is No Such Thing as Too Much Charm.

Platinum Games' The Wonderful 101 had peaked my interest since the first time I saw it back when it was still known as Project P-100. The visuals and charm of a Viewtiful Joe game combined with the game play and charm of a Pikmin game just seemed like a perfectly charm-filled and awesome combination. With all this charm you can tell that I was happy to see a playable demo on the expo hall floor. 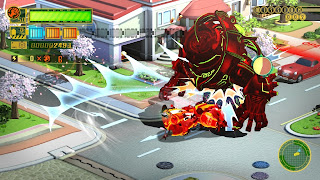 The demo was split into multiple parts each with a time limit, if you didn't finish a section in time you were automatically moved to the next session until the demo was over. The demo starts with a brief and basic tutorial and with the assistance of the booth attendant I quickly learned everything I needed to know to create an army of superheros and fight evil. For the most part the controls are the basic left stick for movement, and A,B,X,Y for jumping and attacks. ZL and ZR are your defenses, one is block and the other is dodge. The touch screen was used to draw the designs needed to change through the three types of hero, Fist, Sword, or Gun. A circle creates the fist, a straight line will create a sword and a line with a 90 degree turn in it will create a gun, (imagine drawing a gun for a stick figure.) If you don't want to draw using the touch pad you can use the right stick to draw the shapes instead. After drawing the shape you have to hit A in order to activate the transformation, this allows for somethings to happen by drawing the shapes without transforming. When you draw shapes you are actually arranging the many heroes, following your lead hero, into those shapes. Circling your heroes around civilians turns them into more heroes to follow you into battle. Specific times in the game allow you to draw a straight line to turn your heroes into a ladder or a chain bridge, the possibilities are endless. 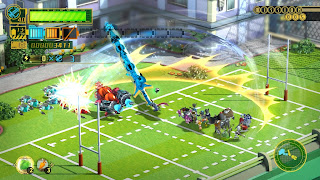 After the tutorial you start your first fight. Basic attacks against enemies are similar to the pikmin attacking their enemies. The heroes gang-up and start hitting things together. You can split your heroes up to fight multiple enemies at a time. Turning your heroes into one of the three "weapons" allows for many things to happen but the most basic is the huge damage increase. (I'll admit that I didn't try out the gun very much during the demo, I had watched the people before me play and decided that the fist and sword were the better choices for this demo.) My heroes became my giant fist and easily destroyed the first alien / robot/ monster/ thing, in the game. The demo went on to fight big bad guys, little bad guys and more. Different occasions required different transformations like the sword being used as a pole vault to get over a building, combining everyone together into jeletin in order to block an attack (yes your defense is turning into jello) or at one point I ran into a building and was required to look at the gamepad where I could move my character around the inside of the building. I had to create the fist and rotate dials (I could only see the outcome of each turn by looking back at the t.v. monitor) to match a code which would unlock the back door of the building allowing us to move on.

Fight as the Ultimate Team of Heroes. 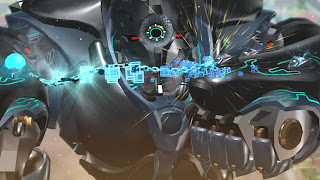 Later in the demo your group of heroes are running down an empty street when a giant robot arm breaks through the earth and starts destroying the city. There is a running scene where you need to keep moving away from the destruction of the ground and buildings around you, sometimes you even have to jump onto the falling buildings in order to move on. This leads up to the fight with the giant robot. The fight starts with the heroes landing onto the giant hand of the robot. You are tasked with destroying three orbs on top of it's hand. As your doing this the other hand either slams down on top of you (turn into jello to defend) or shoots a laser that you have to dodge over. I learned quickly that the sword has the best range so I can attack the three orbs all at once. After destroying those orbs you have to make a chain from one arm to the other and repeat against three orbs on that side. Unfortunately this is when my time ended and my demo was over.

When watching the trailers for The Wonderful 101 they show the three main heroes Red, Green, and Blue but in the middle of playing you can open up a screen and trade out your main hero with any hero you gather while playing. Each hero has a category (fist, sword gun) but their looks are all different. I played as a hero in a snake costume, passing up playing as a hero with a toilet for a head or a motorcycle hero.

The release date is a mystery with some websites saying the end of june and most just saying sometime in Q2. Hopefully it'll come out sometime soon so we can create our hero armies and fight alien robots! Now to go re-play Viewtiful Joe!

Email ThisBlogThis!Share to TwitterShare to FacebookShare to Pinterest
Labels: charm, nintendo, Paxeast2013, the wonderful 101, Wii u