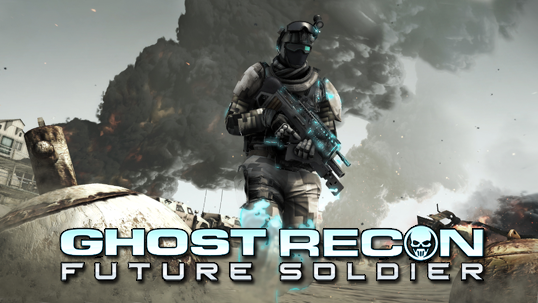 Ghost Recon Future Soldier is currently weighing in at three years in development. First announced back in January of 2009, Future Soldier has faced contant delays pushing it back from its original 2010 release to 2012. Many games go into development limbo during these set backs and come out only baring scars, while Future Soldier seems to be a cumulation of three years of solid work. A variety of diverse multiplayer game modes, a twelve hour campaign, and a strong cooperative component all work together to form an experience that feels familiar yet strives to excel past your average military shooter.

Ghost Recon Future Soldier's multiplayer is based upon three classes: Scout, Engineer, and the Rifleman. Each class has their strengths and weaknesses providing a system that feels well balanced. The class system works fluidly in battle, especially with a strong team. A combination of all three classes should provide with the best results and will often lead to quick battles against teams of random players.

The Scout has unique access to the sniper rifle, submachine guns, flash-bangs, claymores, and the ability to turn invisible. Right off the bat, the Scout's invisibility will lend itself to stealth sniping from the far corners of the map. The Scout will remain a threat in close quarters combat as his invisibility can lead to easier flanking or a quick escapes after skirmishes. Often, one would fear the overpowering aspect of granting a sniper invisibility, but Future Soldier tackles the problem by enforcing limitations on the perk. Movement or firing a weapon will instantly disband the invisibility. Enemy spotting through sensors or intel will also give away the Scout's position. The Scout can also be spotted by a keen eye as their body distorts the area behind them. 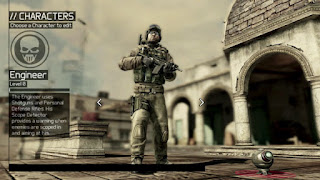 The Engineer class has unique access to shotguns, rifles, decoys, sensors, field computers, jammers, sentries, UAVs, and the ability to be alerted while being aimed at. The Engineer acts as the defense and intel gatherer of the team. Access to mobile sensors and UAVs will consistently mark enemies positions and becomes a necessity in some matches. The Engineer tends to be the less popular class as its weapon selection does not seem to fit the current map selection.

The third and final class, the Rifleman, has unique access to assault rifes, large machine guns, incendiary grenades, ammo boxes, and heavy armor. The Rifleman is the front line objective player of the three. The increased armor on the chest makes the Rifleman a deadly force capable of taking enemies head on rather than flanking. The weapon selection is also the most deadly as only a few shots from an assault rifle can kill any enemy. The large machine gun also works as an excellent tool for covering fire as suppressing an enemy almost completely immobilizes them.

Between the three characters, the Scout and Rifleman were my first two choices. The Scout's invisibility was an extremely entertaining technique that lead to some fantastic kill streaks and stealth kills. In contrast to that, I greatly enjoyed the objective play that the Rifleman is tailored for. The Rifleman lacks the special abilities and equipment of the other classes but remains a deadly force just based upon his power. The contrast between classes lead to completely different play styles and a sense of refreshment from the average run and gun gameplay. Future Soldier has a welcome depth to the multiplayer that will only boost the longevity of the game. 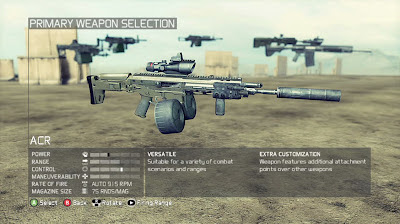 Once you have chosen your character of choice, its time to customize. Everything about your character can be customized. From your load-out to appearance to the way you progress in multiplayer. The system puts almost every other military shooter to shame and will hopefully shape the genres future.

Ghost Recon games have always meticulously and faithfully recreated modern weaponry and Future Soldier is no difference. The guns and technology of Future Soldier are grounded on current day weaponry and designs for the future. The attention to detail on each gun is highlighted in the Gunsmith customization menu. Gunsmith allows customization of almost every part of every gun in the game whether it be your primary gun or secondary pistol. You can customize the optics, paint, trigger, magazine, underbarrel, gas system, side rail, barrel, muzzle, stock, and more. If you think you should be able to customize it, you can. Some accessories unlock as you progress in the game while others can be purchases using tokens that you are granted upon leveling up. There is no specific path to follow with unlocks, just simply choose what you are interested in. Gunsmith is amazing and definitely an aspect of the game that will make you say "wow". The system is fluid and allows players to instantly try out their new gun in the firing range. Instead of judging which barrel type is the best choice through a series of multiplayer matches, players can try it out on a few targets right in the Gunsmith menu. That small feature and the rest of the attention to detail in Gunsmith truly make it an integral part of the experience.

In the load-out menu you are also able to choose between a variety of grenades and equipment such as mobile cameras, med-kits, and ammo boxes. The equipment available varies from class to class but there are some crossovers.

As you progress through multiplayer and individually level up your classes, you will be presented with ways to customize your character to your liking. At certain intervals, you will be presented with two pieces of equipment or weapons to choose from. At level sixteen Rifleman, I was asked to choose between an EMP underslung launcher or an ammo box. Later on in the game if I regretted my choice, I could use a respec point to reset my unlock tree. Not everyone will be a fan of this system but I did enjoy customizing my character and knowing that not many others will be following my same path.

Once you finish customizing your character, which almost feels like a game in itself, its time to jump online and rack up some kills, take down some objectives, and earn team points. The beta granted access to the Conflict and Saboteur game modes. The two opposing teams are broken into two squads that you can spawn on during gameplay. Thankfully, chat is open to the entire team. 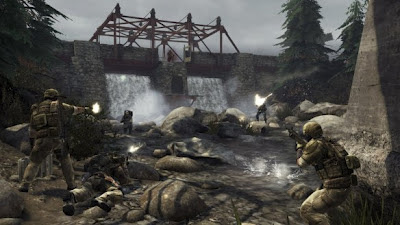 Conflict randomly chooses objectives and place them around the map, similar to Killzone's Warzone mode. By completing objectives, your team earns points. Conflict rewards teams that work together as a strong team can easily lock down control points and capture objectives. Different objectives also provide different benefits for your team. If your team captures the relay beacon, the enemy team is temporarily visible on the HUD by red outlines. Conflict is an extremely enjoyable game mode that keeps gameplay fresh and ever-changing throughout the game. Every game plays out differently as objectives and their locations are constantly changing.

Saboteur places a neutral bomb in the center of the map. Both teams work to control the bomb and to arm it in the opponents base, all while protecting their own. The team that detonates the bomb wins the round. However, if time runs out, the team with the highest team score wins. Team score is earned by working with your teammates, reviving them, spotting enemies, etc. Saboteur was my favorite mode of the two available as rounds were extremely intense as a single mistake could end the game in under a minute. Communication is key as players need to act offensively to control the bomb while also attempting to defend their own base. Strong teams will almost always win, which can be frustrating for teams of randoms.

The beta gave access to two maps: Mill and Pipeline. Mill is a rundown mill town hidden in a lush forest mountain. A river divides the map while the deserted town provides cover during firefights. Teams clash to control the three bridges that overlook the river. Players have the option to run across the river but will often be picked off by players on the higher ground. Pipeline brings players to another abandoned town outside of a large city. Two buildings overlook the center ground while a side path runs along the side perfect for flanking and small skirmishes. The two maps felt extremely balanced and had a sense of character that other games are lacking. I can not wait to try out the other eight maps to see if they improve upon the established rotation or if we were given the top two to try out.

The multiplayer is squad based with two squads of four per team, or 8v8. You can spawn on your squad, if in a safe location, or in your team's spawn point. Working together as a team to earn team points is extremely important as that can be the deciding factor during an objective tie. Players can gather intel on enemy positions, which outlines enemies with a red silhouette, by disabling enemies with the taser or through certain objectives. I can not stress enough how important team work is in Future Soldier. Intel can be a huge advantage for teams so be sure to keep an eye on your teammates as you will be alerted when a teammate becomes disabled. The secondary right trigger can be used as a guidance system to other teammates or objectives. It is a great feature for new comers and those that are focusing on teamwork and objective play.

The cover system of Future Soldier is fast and intuitive. While in cover, a yellow marker is displayed, allowing you to quickly jump between cover. You can also hold down the sprint button to run to cover without using the system. I personally loved the cover system, even more than Gears of War. My only complaint is that it can become a bit sticky as you will often try to snap into cover instead of running by it.

Ghost Recon Future Soldier is a game that fans of the series will undoubtedly enjoy. The entire formula is improved upon. Gunsmith blows every other shooter's customization options out of the water. There are enough possibilities per gun that you will almost never run into someone with the exact same weapon. The three classes are extremely unique and aim to make teamwork a required part of the experience. Each class plays differently and will essentially change the game depending on who you play as. The combat feels familiar but fresh. Fans of Ghost Recon and SOCOM will love the game as it highlights the strengths of both series. Combat is team based, cover based, and only a few bullets will knock an enemy to the ground. If you have been overlooking Future Soldier as a contender for a fantastic multiplayer experience it may be time to reconsider. Only time will tell how the complete experience will be but as of now, Future Soldier is a great game and one deserving of your time and money.

Will you be picking up Ghost Recon Future Soldier? What did you think of the beta? Let us know down below!