Leaked Playstation 4 Specs Look Too Good And Too Expensive 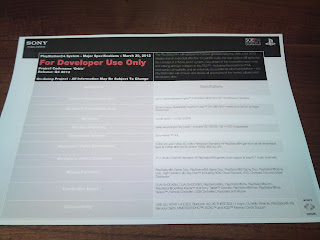 This snapshot of a leaked list of Playstation 4 specs and a 2013 release date. Continue on for the full breakdown.


The PlayStation 4 will represent a massive generational jump. With a Q4 2013 release and an expected effective 10 year life cycle, the new system will epitomize the concept of a 'future-proof' system. Way ahead of the competition spec-wise and solving all major critiques to the PS3 including the presence of full backwards compatibility and an extremely accessible development platform, the PlayStation 4 will conquer and please all spectrums of the market, players and developers alike.

It is no secret that Sony likes to go all out with their electronics and if this image is to be believed, the Playstation 4 will be no different. The below specs are the top of the line and will therefore be leading towards a very expensive system in a comparable range to the original PS3 launch.

The current CPU in the PS3 is the original Cell engine running at 3.2Ghz with 1 PPE and 8 SPEs. If this CPU is to be believed, the PS4's CPU would hypothetically be sixteen times as powerful as the PS3. Each PPE behaves as the brain and is able to distribute its workload systematically to the SPEs. It may seem costly for such an increase in power, but the PS3 was the first commercial piece of technology that utilized the cell engine. Enough time has passed that the increase in power is a reasonable fit and without the R&D costs of the original cell, its not as costly as it looks. The current generation cell processor only costs Sony roughly $46 per system.

The GPU in the PS3 was an RSX @550mhz. This new GPU is set to have 8xGDDR5 chips which should result in 2GB VRAM. The rumored PS4 is only based upon that, so anything could change in this time. The current GK104 GPUs will be coming in at $400 so the modified version, Sony's bulk discount, and a years time should greatly lessen the cost.

If Sony once agains goes with a standard hard drive, this will barely affect the cost of the console and will be very appealing to consumers. I know I upgraded my PS3 HDD to a 500GB last year.

The Playstation 3 followed a similar architecture with 256MB of XDR and 256MB of GDDR3. It is shocking that the system is rumored to run with with such high memory capacity but, as I stated earlier, Sony may truly be looking to make this into a ten year system with top of the line hardware.

Not surprising at all as Sony's next step in the TV and cinema marketplace is capturing the 4K crowd. Unfortunately, 4K sets are unheard of and projects cost thousands of dollars. Sony's 4K Projector shown at this years CES costs $25,000. You read that right, thats three zeros. Sony may be planning for the long run though with allowing the support of 3996 by 2160 pixel screens and hoping that within ten years the price will be more affordable and have a larger market-share.


Once again, take this as pure rumor until validity of the image can be established.