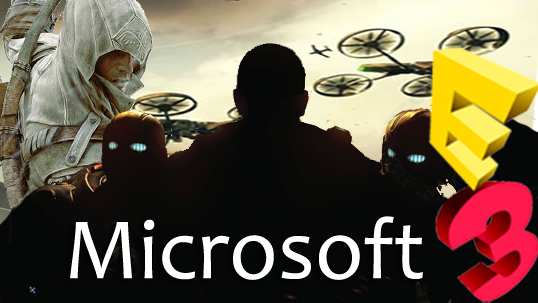 Halo 4
Starting things off with a live action trailer of Halo 4. USNC Infinity is sucked into a black hole of sorts. Master Chief watches as ship flies over his head and crashes into a jungle. Shortly after, a covenant sphere rises from the ground to investigate the crashed ship.

Live Gameplay Demo (above)
Master Chief continues through the jungle in search of the crashed ship. Overall, the HUD is almost identical to the past Halo games with the addition of a chat box on the left side. It is extremely beautiful. Shortly after we begin our journey, we start running into our everyday Halo baddies. A quick burst from the rifle and we quickly finish the patrol off. Now, things are getting interesting. As we continue, we are introduced to a new enemy class, obvious inhabitants of this new planet. They seem to be mechanical aliens of sorts. One of the enemies face opens up revealing a burning red skull. We quickly dispose of him as he bursts into glowing ashes. We pick up his new rifle and continue on. The demo ends as we flip on a thermal visor and view an onslaught of creatures approaching our location.

Our Halo 4 coverage ends with Cortana speaking of the deterioration of AI and the rise of a new enemy.

"We will be bringing xbox to not just consoles but to PC, Phones, and Tablets.


Gameplay trailer of Splinter Cell: Blacklist.
Iran-Iraq border where Sam Fisher must prevent terrorists from following through with the next blacklist murder. The gameplay is once again, beautiful. Executions and gunplay are cinematic. In Blacklist, Fisher has the ability to scale entire cliffs and building Assassin's Creed style.

The game does have Kinect support. In the demo it is used to shout the catchphrase "Hey, you". As the enemy moves in on our position, we pull him over the ledge and take advantage of a nearby puddle to shock a group of soldiers with a stun gun.

We continue onward into the building to rescue our target. Typical Sam Fisher spy moves such as the snake cam and C4 charges. Demo ends when we break down a door revealing our target. Unfortunately, before we can get any information from him, our target shoots himself.

In FIFA you act as the head manager, making substitutions by voice in real time.

Madden 13 you are placed on the line making live calls to the rest of your team. Voice controls seem to work very well, shout players names and controls such as "block left" or "audible" for complete control.


Fable: The Journey
Trailer cinematically displays how kinect controls can be used to cast different spells on enemies. No word on if this is an on-rail shooter.

Locust are back and badder than ever. Follow the normal crew as they battle hordes of Locust and perhaps as they fight for their freedom.

Ditches the usual professional feel of Forza for off-road and festival style races.


Kinect Dashboard
Enhanced Bing search for finding games, movies, and more.
Kinect voice control is being adapted for more languages, live demo shown of Kinect being controlled in spanish.
Four new entertainment providers: Nickelodeon, Paramount, Machinima, and a spanish video service.
NBA and the NHL are both coming to XBL.
The ESPN app is being expanded to a live, streaming service for more of their shows and broadcasts.


Xbox Music
Coming to Windows 7 PCs, phones, tablets, and Xbox. "All the music you want, everywhere you want it".


Nike+ Kinect Training
Kinect is used to assess your fitness and workout to provide you with accurate improvements. The system will use XBL and Nike+ to keep you motivated and competitive with friends.


Xbox SmartGlass
Supports: Xbox, Windows Phones and Tablets, iPhones, and Android phones.
Throw a movie you were watching on a tablet instantly onto your TV. At that point, your tablet instantly becomes an information screen. For example, while watching Game of Thrones, your tablet can be used to view where every scene was filmed around the world.

True multi-screen functionality for movies, but how do games take advantage of it? While playing Madden, your tablet can become the controller to choose and draw plays, pass the ball, etc. While playing Halo, your device becomes integrated with Halo Waypoint.

SmartGlass can be used to completely control the Xbox dashboard with your phone and tablet. Swipe left to switch the dashboard to a new tab, etc.

SmartGlass will be bringing Internet Explorer to Xbox this year. Completely controllable by your phone, tablet, or Kinect.


Xbox Entertainment will be coming to Windows 8 Tablets and PCs
Play games, xbl, earn achievements and more with Windows 8. SmartGlass will also be supported.


Tomb Raider
Gameplay Demo.
Laura sneaks along a mountain ruin ledge overlooking a few enemies. She draws her bow and quickly dispatches two of them. The third enemy notices her and begins shooting. The walls burst into pieces as Laura dives by. She continues onward down a zipline.

A woman's voice is heard over Laura's walkie-talkie. It becomes clear that this woman is the source of Laura's motivation to continue onward. Enemies react in real time depending on where they are damaged by the bow. The environment is also crucial to the combat of the game. Shooting lanterns and oil will save ammo and provide beautiful combat set pieces.

As she continues, Laura is swept down a rapid river, smashing into rocks and tree trunks. She is thrown onto a wrecked airplane and manages to grab a parachute before breaking through the glass window. Laura falls quickly as her parachute is ripped off of her back. Demo ends as she crashes onto the ground.

First piece of DLC will be available first on XBL.

Ascend: New God
Made by Toy Soldiers team.
Persistent A-Synchronous Multiplayer across XBL and Windows Phone 7
LocoCycle
New Twisted Pixel game.
Matter
Not a lot of details, but game is reminiscent of Portal.

Resident Evil 6
Live gameplay trailer.
Demo plays as Leon in a destroyed city. A helicopter flies overhead and begins mowing down hordes of zombies. Leon continues off the streets and into a building. It appears that Leon can move while shooting, albeit very slowly. Once making it through the building, Leon continues down onward onto an overpass.

After cinematically disposing of a few zombies, an airplane falls from the sky onto the bridge, exploding. Leon begins running around and on top of cars, similar to the boulder chase in RE4. You make your way onto the helicopter that was previously helping. Unfortunately, not long after take off, the pilot becomes a zombie and the helicopter flies out of control. Demo ends as Leon stands under the wrecked helicopter, surrounded by hundreds of zombies.


Wreckateer
Kinect supported, XBL Arcade game. Use Kinect to slingshot cannonballs at castles filed with goblins. Different types of cannon balls have different abilities such as breaking into three different balls or flying.

You are the new kid and town and it is up to you to save it.


Call of Duty: Black Ops 2
Terrorists attack in an attempt to wipe out the world leaders at the G20 Summit. The madame President is under your protection as you make your way through downtown LA. Gameplay starts as we make our way down the freeway. Mason is tasked with protecting the president as she makes her way down the road below him. This is our first look at some of the new tech of Black Ops 2. The demo features a new sniper rifle that has the abilities to see through and shoot through walls if charged long enough.

In the interest of time, the demo jumps forward. Mason continues onward in downtown LA fighting small groups of terrorists. Upon making it through a building and onto the street outside, a missile takes down an entire building. It collapses into the street and pushes a giant cloud of debris outwards. The next section of the demo has Mason climbing into a harrier-like jet tasked with protecting the president's convoy. After a minute or so of protection, the player is given complete control of the jet and thrown into a dog fight with a few other jets. Sadly, this is where the demo came to a close.

That is it for Microsoft's E3! A lot of big news such as exciting new games, SmartGlass, Windows 8 Xbox support, and so much more. What was your favorite part of it all?

I just got a new Windows Phone so I am looking forward to the increased connectivity.