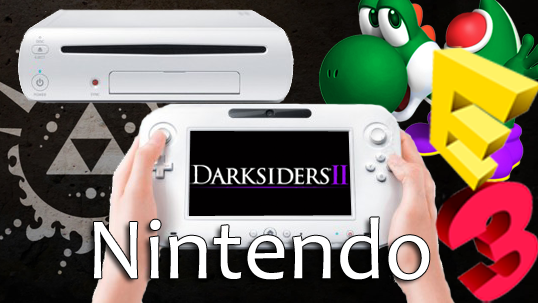 "It has already been ten years since we first created Pikmin on the GameCube". Huge graphical improvements in the environment, the Pikmin, and animations. There is a new Pikmin type called the rock Pikmin which are used for breaking harder objects or enemies.

The Wiimote and Nunchuck are used for basic controls and easy aiming. The WiiU gamepad can be used in conjunction with the Wii controls or alone. The gamepad will feature a map for easy exploration and Pikmin placement.


23 Wii U Titles will be shown today, on stage

Wii U will change gaming, social interactions, and entertainment. It is accessible to everyone and "stands to revolutionize your living room".

Wii U will support two gamepads. Rumble is also supported.

The Mii-Verse will be the first thing you see upon turning on your Wii U. Eventually, it will support 3DS, smartphones, and more. Mii-Verse is a main street of friends and players you have met that are actively sharing messages relating to trending games.

NSMBU will feature interactions with your friends on the course selection screen such as bragging a high score or warning messages.

This is the first HD Mario game and I have to say, the animations and characters are very detailed. Up to four players are able to play simultaneously, or five with one player strategically placing blocks with the Wii U gamepad.

"A must-have, complete edition for the Wii U"

Catwoman will be completely playable and exclusive on the Wii U.
The gamepad will be used as Batman's gadget menu, map, and more. For example, the Bat-a-rang is completely controllable with the gamepad.

"The definitive Scribblenauts experience for the WiiU"

Scribblenauts Unlimited will feature item creation that can be shared with friends and a more in-depth list of creations. The Wii U game will also feature co-op play.

43 million copies of Wii-Fit and Wii-Fit+ have been sold so far worldwide.
The gamepad is used for an additional screen in games such as spraying water at dirty Miis. The game will feature of-screen play as well, along with the compatibility with certain calorie counting devices.


Karaoke and dancing game with the gamepad used as the lyric screen. The TV screen acts as a "sing-along and dance-along" for those watching you that desire to awkwardly sing and dance with you.

There will be an entire hour long show later on for the 3DS at e3.nintendo.com.

This game is different from the Wii U game. NSMB2 "is all about the gold" and features more coins in each level than you've ever seen before.
Available August 19th.

Stickers found in the environment becomes the battle system and ads to the games depth.
Available physically and digitally this holiday season.


Luigi will have to travel through multiple mansions in order to solve new puzzles and capture new ghosts.

A beautifully crafted lego world with an emphasis put on exploration. The game features a pretty spectacular movement system that allows for building scaling, climbing, and more.
The Wii U gamepad acts as a map and police scanner, a thermal scanner , and more.

The game will also be coming to the 3DS in a smaller, toned down version.


The player using the Wii U controller acts as "The Puppet Master" by choosing which dance moves the dancers have to perform, in real time.

"One bite and you're dead".


The gamepad acts as your all in one survival kit. Inentory, radar, scanner, sniper, door hacking, shake it to break free.
The game, just from the preview, looks extremely suspenseful and beautiful. The one bite and your dead aspect as well seems to stand out in the Zombie genre as games tend to have players immune to the virus. ZombiU looks to be shaping up as the true Zombie survival game.

Aha, Reggie was just "Zombiefied" by the WiiU camera.

Other Ubisoft Titles on Wii U

NintendoLand brings twelve attractions to Wii U players. Five have been announced so far:

Launches in line with the Wii U

More information on the WIiU, NintendoLand, ZombiU, and Arkham City will be available at e3.nintendo.com.

Thanks for reading, what was your favorite part from Nintendo's conference?

I was a bit disappointed in the overall show; I was expecting more information. That said, ZombiU and Lego City seem to be the most promising.