Mike Here.
Suda51's most recent release is the Kinect required, arcade game Diabolical Pitch. As previously stated I happen to be a huge Suda 51 fan so writing another article of on his games is very exciting for me. This time Suda51 changes pace a little bit by bringing us a baseball game? Well, while baseball is a part of the game, this is no ordinary baseball game.


Suda51 is by no means "normal," which is pretty obvious if you have played any of his previous games. I personally believe that he is genius and creates the most unique and amazing games out there, but that's just my opinion. In Diabolical Pitch, there is no lack of the unique or the amazing.

Remember this?﻿ This was the teaser picture for a Grasshopper Manufacture game that would be released for the kinect. This was the teaser for Codename D which is now Diabolical Pitch. I personally find this picture to be really f-ing creepy. Suda51 has created a game with an equally creepy vibe, though it doesn't look quite as nice as that picture, it still succeeded in intense creepiness.
This is the first boss of the game. The ground opens up and slowly the creepiest rabbit since Bunnicula (Anybody?) rises up with its bright glowing eyes. So if your worried about creepiness its there. There are multiple animal "dolls" that attack you. Each animal has a different ability, The tiger is the most basic animal which just walk up and attacks you, the monkey throws chainsaw blades that you must crouch or jump over to dodge, the elephant takes much more damage and deals much more damage but headshots ricochet the baseball into other dolls etc. The variety is nice cause it keeps you on your toes (sometimes literally) by making you use different tactics to defend yourself or destroy them.

There are five worlds in the game. Adventure, Horror, Space, Garden, and finally the Castle. Each world has 4 areas within them. For the first four worlds there are three areas plus an extra level in which the only goal is to get more points. The Final world has the "Final" area which is the last boss battle.

Alright enough about all that lets talk story. You play as baseball legend McAllister. The game opens in a baseball field with an announcer saying that if McAllister pitches an out his team will have one of the most amazing winning streaks in baseball history. McAllister throws the final strike and the game is over. The announcers and crowd members alike start screaming and applauding this amazing pitcher. The announcer notices it first, but down on the field McAllister is hunched over holding his shoulder. No one knows why but McAllister could never pitch again, or move his pitching arm at all. McAllister goes into an immense depression and stumbles on the website of an amusement park known as Queen Christine's Dreamland, claiming to make all your dreams come true. This just makes McAllister even more upset and he goes out for a drive in his favorite car, ending in a head on collision with an 18 wheeler. 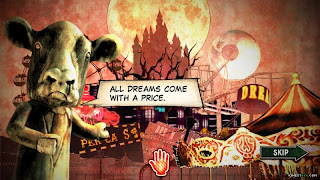 The next thing you see is a very creepy cow in a suit standing in front of an amusement park. The Cow tells you that you are at Queen Christine's Dreamland. He asks what McAllister wishes for. McAllister says that he wants his pitching arm back. The creepy cow then pulls out a new arm and tells McAllister to put it on which amazes him because its fully functionally. McAllister is happy and ready to leave but the cow tells him that he needs to work his way to the castle at the end of the amusement park because "All Dreams Come With a Price."

McAllister is Suda51's most recent main character (besides Juliet Starling of the not yet released Lollipop Chainsaw.) Though he doesn't really feel like one of Suda51's characters. He doesn't have much of a personality and he really isn't anything special or interesting. When you find out about his past things become a little more interesting but its never really elaborated on. Queen Christine's Dreamland feels just like a Suda51 world though. Playing through sometimes reminded me of areas from Shadows of the Damned. 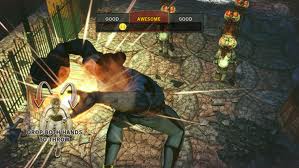 Anyway, now in control of McAllister the game begins. I know there are some people out there who don't like the Kinect, and that's their own opinion, I love the Kinect and it works great with Diabolical Pitch. The actions are simple, pretend your pitching a baseball with your dominant hand. The other hand is used for aiming, which isn't required to hit something but it helps if you want to hit something specific and this is the only way to get headshots. (which is required for some dolls types) When dolls get to close to you you can kick forward knocking them out of the map and giving you a chance to regroup before they return. Some dolls throw things at you, if its a ball you have to move your hands in front of you or too a side to catch it. If its a saw blade you have to crouch under it or jump over it. Then there are the diabolical pitches. These are the super powered pitches that you can unlock throughout the game. There are a total of seven diabolical pitches (six in single player and one more in multiplayer.) Each of the pitches have their own perks and ways of destroying the creepy killing dolls.

The responsiveness continued to work in multiplayer. Some Kinect games seem to break when multiplayer gets involved. Diabolical Pitch is not one of those games. Multiplayer takes you through the main story but one player plays as McAllister and the other plays as high school rival pitcher Eugene. The two characters work together to take down more and stronger enemies than in the single player game. Another change that comes to multiplayer is that when one player is taken down by the murderous dolls, the two players can pose into a revival position to save the downed member. Each player builds up and can unleash their own diabolical pitch without affecting the other player's. There is also one more diabolical pitch that the two players use together when each of them has a full charge, this is the strongest diabolical pitch of all. 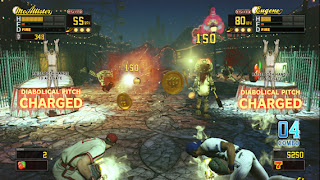 Minutes after finishing the main game I told my girlfriend to stop doing her homework, there was something important we had to do. This of course is the multiplayer. My girlfriend enjoys playing video games with me on almost a daily bases but I wasn't sure is she would enjoy a game like Diabolical Pitch (shes more into Fruit Ninja Kinect, other Kinect games embarrass her). I gave her a quick run down of the controls and then started the game. After a few seconds she was getting dolls just as quick as I was and unleashing her own diabolical pitches without me telling her how. She says the game is really fun and wants to play it almost everyday.

Diabolical Pitch is another great Grasshopper Manufacture game that I will continue to play and love for the rest of my life. The game brings a familiar "what the hell" Suda51 vibe that many of us have come to know and love. Is this one of the contenders for game of the year? Probably not, but it is an awesome game that brings some great Kinect gaming to a mature audience (Finally!).