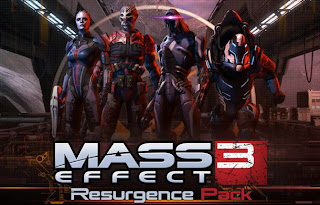 Earlier this week the Resurgance DLC pack was released for Mass Effect 3. This multiplayer DLC contained two new maps, some new weapons and a plethora of new characters including two new species: the Geth and Batarians. While none of this content is a "game changer," I personally love having new characters to play as along with new guns to shoot down the baddies in the new areas.

I wish I could go into detail about all of the new characters, guns and maps but, like all other parts of multiplayer, you need to unlock characters and guns through the random packs. Resurgance brings the new Premium Spectre pack, for only 99000 credits (or 240 microsoft points) you can get "five random items or characters with at least two rares or better and a higher chance for Ultra-Rares". I wanted the new characters as soon as possible so instead of working hard for the 99000 credits, I chose to spend my microsoft points on the pack. It took a few packs, but I managed to unlock a few new characters (some only new to me cause i had not unlocked them yet). I unlocked a Batarian Soldier and a Geth Infiltrator, which came with the DLC, both Salarians, and a Krogan Sentinel. 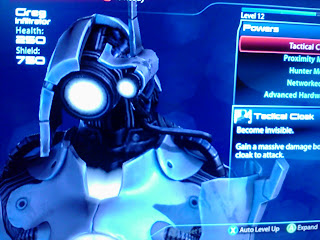 The new characters share some similarities and differences with the other characters. The Geth Infiltrator (which I named Greg) moves like the Quarians and Salarians do, but that's where the similarities end. Greg has a heavy melee like no other. Holding down the melee button makes the Geth fighter crouch to the ground and create a field that surrounds him. The field continues to pulse every few moments while hurting or destroying all close enough to take the damage. Also, the Geth have an ability that others do not: Hunter Mode. Hunter Mode allows you to see enemies behind walls or cover, but it also halves your shields. Even with half shields I loved having hunter mode. Hunter mode will stay on permanently until you turn it off. If you find yourself on the losing side, get behind cover and turn it off; allowing your shields return to their max level. 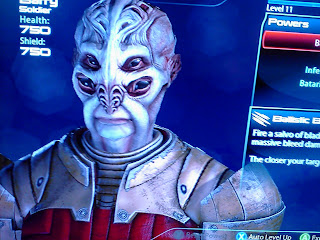 The Batarian Soldier (named Barry) has the moves of a Turian or Krogan, so nothing other than walking or running, but he has some unique abilities. Barry can use Blade Armor which is exactly as it sounds. Like the Hunter Mode, it stays on until you turn it off. It slows your power recharge but it gives you a stronger defense. If enemies make the mistake of getting up close for some melee combat, the armor actually hurts them for hitting you. Batarians also have Ballistic Blades. The onmy-tool turns into what looks like a cross bow with multiple bolts. The closer you are to the enemy the more damage it does and after it hits, the characters continue to take bleeding damage. Another thing about Batarians is they have the strongest heavy melee in the game. Keep that in mind when things get up close and personal.

Fortunately, the maps were available without having to unlock, so I did play both of them. The new maps are Firebase Hydra, and Firebase Condor. First I played Hydra and could not help but feel a resemblance to the layout of my favorite multiplayer map: Firebase Dagger. There are some definite changes, but it definitely feels the same. Playing as my new Salarian named Wallace, my team took out the Geth with little problems and full extracted out of there.

Next, I tried out my Krogan named Unique while playing on Condor. Condor felt like no other map so far and I really enjoyed it. Its not a very big map and firefights become tight and exciting pretty quick. Though he wasn't a DLC character, I fell in love with playing as a Krogan. Fighting Cerberus proved no problem against a team of two Krogans and one Human soldier, and once again there was a full extraction.

I did not get to play with a lot of the new weapons because I didn't unlock them, but I love the new characters and maps and I'm excited to pick up the controller and play again. The new maps are nice additions to the list of some already decent maps. Oh, and you cant really beat the free price for the DLC.

I'd love to hear your thoughts and opinions about any maps, guns or characters. Let me know how you play Mass Effect 3's multiplayer.