Welcome to another week of "What We're Playing"! Let us know what you're playing, what your opinions are, and what you think we should check out in the comments below. Every week we will highlight some comments of the previous week. As always, read at your own risk. There may be spoilers.


What Jon is Playing:

Over the past week, I finished off Dante's Inferno, worked through most of WET, almost beat Frogger, and got some playtime in as Ghost Recon Online and Tribes Ascend.

I had wanted to pick up Dante's Inferno since it launched. I love God of War styled games and was excited to explore a game that delved into Dante's Inferno and the layers of Hell. I was skeptical of the storyline at first and was not expecting much but, the game delivered a powerful love story about forgiveness and sin. I fell for Dante's character and the crusade he followed to save his beloved Beatrice from eternal damnation. This game, if you fully invest yourself into the character and world, can truly pull on your heartstrings and morality. During my play through, I had desired Dante to be a holy character that sought redemption not just for himself, but for the other lost souls throughout the layers of Hell. I figured that if I, Dante, could earn forgiveness from Beatrice for my sins of infidelity, lust, and treason then why couldn't the other souls? I found myself taking a double standard. I would come across damned who had slept with their husband's brothers and murdered their family. Through just a few descriptive sentences I would be tossed into an internal debate on right and wrong. I wanted to damn the soul to hell that had slept with her husband's brother, but was I any different? I had cheated on Beatrice, yet I had the right to earn redemption while she did not? How about those that murdered their family in acts of rage versus survival or guilt, were they any better? I thought long and hard about the actions of others, and myself as a person. It is not every day that a game can challenge your beliefs and test your morals like Dante's Inferno did. Oh, and it was a pretty kick ass game.

WET was another game that I had desired since it released. I loved the acrobatic gunplay and grindhouse feel but was hesitant to invest in a short campaign that received mixed reviews. I have to admit that WET is not a game for everyone. The story is weak, characters feel shallow, and controls aren't always the most responsive but it is very fun. I do find myself wishing that there was more depth to the game in the form of either side missions or a more detailed skill-tree. Other than that, the game is very fun as a mindless acrobatic gun game. After a few hours I still feel excited when I slide across floors or run across enemies like a wall all while shooting my gun. I feel that with a little bit of work, a sequel could be an amazing game. Unfortunately, the mixed reviews and not-so-stellar sales will most likely retire the game for good. If you do find the idea of an acrobatic grindhouse shooter to be fun, I highly recommend picking WET up as it can be found for very cheap.

Frogger. An old game that has retained its charm and difficulty throughout the years. I recently was able to download Frogger Returns as a freebie from my Playstation Plus subscription and within a few games I was back into the traffic dodging, frog saving, hopping action. Not much has changed throughout the years besides a graphical overhaul and the addition of a few new modes and multiplayer but it is not necessarily a bad thing. Frogger is a classic game that felt refreshing to play in comparison to Dante's Inferno and WET. If you've never been a fan of Frogger, there is no reason to pick up the game besides the easy trophies!

My final two games are some upcoming and recently released PC free-to-play shooters: Ghost Recon Online and Tribes Ascend. Both are very contrasting games that felt very solid and accessible for free to play shooters. Everything can be unlocked through progression but shortcuts can be made with real cash. Ghost Recon Online can be a great game, especially for a free to play, but I can see it being greatly over shadowed by Future Soldier. In comparison, GRO would seem to be years behind Future Soldier and it is instantly visible. GRO is a free to play shooter, it does work very well and it is worth checking out but, if you only want to play one Ghost Recon game and money is not a factor, I highly recommend Future Soldier over Online.

Tribes Ascend is honestly, and I can't say this much, a game I did not even know existed until PAX. Having put a few hours into the game over the course of the week and having tried out all the characters, I can see its appeal to the fanbase but the game is just not for me. Websites described the game as twitchy yet I found it very simplistic with the shooting mechanics. If anything, the game requires instant depth, distance, and physics perception over "twitchy". Twitchy to me means quick, fast paced shooting while in Tribes I found myself lining up my shots before shooting. The speed of the game is extremely fast and is a crucial part of gameplay. Every player is equipped with skis and jetpacks. Jetpacks are used to gain momentum while skis are used to carry that momentum forward, down hills, and across landscapes. The maps are very large but a master can circle one extremely quick with a right combination of tools. Tribes Ascend is definitely a game that will take some time to master but was extremely unique and exciting. If you have a PC I recommend trying it out as it is free and has rather low requirements.

What Mike is Playing: 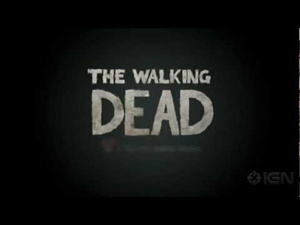 Hey everybody! I have some bad news. This week happens to be finals week and I have a lot of work to finish before the end of the week so I'm limiting myself to one game this week. and that game is The Walking Dead.

I haven't played too much but what I have played I've really enjoyed. I'm planning on writing a full article as soon as I can but because of finals and some other things that may not be until next week. What I will say is that the game is definitely unique and beautiful with its comic book style cell shaded graphics. Also I love the idea that a big decision can be made at the beginning of the first episode and it will affect everything from there on, virtually making it a different game every time you play it. Lets just hope that there is more than three different color explosions at the end.

"I feel the same way about what you said about playing Sly. There's just something about those types of games that I played back then that seems to be lost in this current gen of gaming, and that's a real shame."

What about you, what's on your gaming agenda?

Email ThisBlogThis!Share to TwitterShare to FacebookShare to Pinterest
Labels: whatweplay