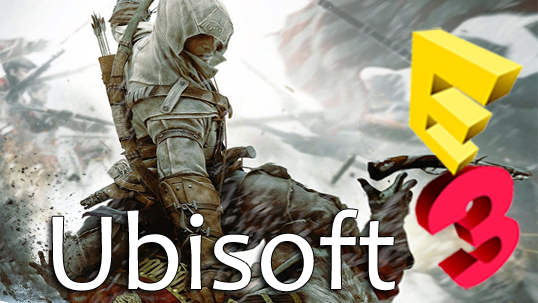 The number one dance game in the world. Introduction done by Flo Rida.

NSFW tribal woman sitting on top of the character at some sort of ceremony, rallying tribal warriors to take down Vaas.

Gameplay demo starts with our character standing on a cliff overlooking the ocean and another section of the island. He dives off head first into the water in what is an awesome animation sequence. From there, its up a beautiful jungle path until bumping into an outpost of enemies. A few dramatic knifepoint lunges and arrow shots later and the area is clear.

The demo progresses into a trap Vaas set. The compound bursts into flames and its an all out fight for survival as he works his way to capture Vaas. He fights through enemies and their vicious tigers before finally catching up to Vaas in a warehouse. Before having the option to take him down, Vaas sticks you with some sort of hallucinogenic drug leading to a very trippy walk along a bunch of broken television screens.

There is not one, not two, and not just three islands for you to explore in single player.


Co-op is making a return from conviction.


Marvel The Avengers: Battle for Earth


Coming Fall 2012 to consoles including the Wii U.

Rayman Legends on Wii U

Murphy is the dedicated Wii U controller character. Swipe the screen to commit special actions to help Rayman along. Final version of the Wii U game will support up to five players and Wiimotes.

This new map plays music as you run across different pads in the level.

"How long will you survive"
This is what Killer Freaks USED to be before the development team went all out on the idea.

The assassin makes his way along the tree tops before dropping down and killing a deer with a bow. The smell of blood attracts a few wolves that are easily killed off with few shots from the gun. The deer meat is then brought in to a local camp in return for information. The assassin finds out that the templars are held up in a local fort.

The demo cuts to the assassin approaching the fort by treetop before jumping down and eliminating a small patrol with a tomahawk. The assassin then scales a cliff face in order to gain entrance to the fort. Many fans were worried that the addition of guns would ruin the gameplay style of Assassin's Creed 3 but, it seems that the reload speed is used to influence their use on tactics, such as shooting gunpowder, over as a straight forward weapon.

Game follows a thirty year span: before, during, and after the revolution across all four seasons.


17 Million people watch E-Sports on Twitch TV and Shootmania aims to capture that audience. 6 pro-gamers are brought in to show off a new game mode: Elite. One person is chosen from the team to face against the other team of three. The solo players has access to a one-hit rifle while the team of three are using two-hit rocket launchers.

Control an entire city's infrastructure. Everything from security cameras to personal information.

Gameplay demo features a man on a mission to track down Joseph Demarco, a guy who obviously did something worth tracking down. In order to gain access to his art show, the guy uses his phone that controls the entire city to create a temporary communication blackout, distracting the bouncer.

I am having a real hard time describing this game, I have seen nothing like it before. So here, just watch the trailer (coming soon).


Thats it for Ubisoft! What was your favorite part?

I have to say that ZombiU looks amazing (Killer Freaks already looked great so a full upgrade to ZombiU will only be an improvement) and Watch_Dogs just became the game I am most anticipating.