An E3 Dream: The Future 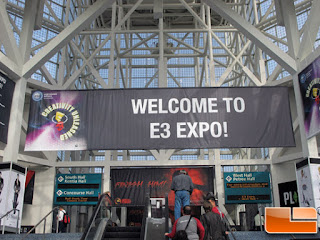 This will be an opinion piece based upon my dream E3 that involves everyone, even those at home. Everything inside is completely plausible and something that could have been done this year.

Imagine turning on your Xbox 360 or PS3 and being greeted with an icon resembling the image above. This is my dream E3.

Game Company takes the stage at E3 2012, Gamers huddle around their system of choice; dying to see what new games, trailers, and news will be announced. You back onto your console's home screen just as the count down clicks to one second, you load up the E3 stream. E3 2012 is being streamed live to your console this year and being made available all week afterwards.

Game Company's President walks on stage and gives a short introductory speech. You sit at the edge of your seat as he announces that your favorite series will be receiving a new game this fall. A developer from your favorite series takes the stage and alerts the audience that he will be walking you through a live gameplay demo. The lights dim and the screen turns black.

You lean closer waiting for the demo to start when an icon pops up on your screen. "Please pick up your controller and hit 'Start' to play or 'Select' to skip". You look quizzically at the screen and press 'Start' on your controller. The demo of your favorite game starts, but YOU are the one playing it. Your heart races as you play through the demo. This is the first year that every E3 demo is playable by everyone via their respective systems.

As the demo comes to a close, you sit back. The press conference picks up just as it would have if it was the developer playing and not you. The stream had been paused until you finished the demo. The next demo you finished a bit early and had to sit through a few seconds of the game's information before the live conference caught back up. When you played through the conference later that night, everything was in sync.

This is my dream E3 and there is no reason that it should not be possible today. With services like Gaikai and Onlive bringing entire games to your hands instantly, there is no reason the game companies can not put together a presentation that puts each game demo in gamer's hands, live, as it happens.

What about you, what is your dream E3?