Aliens: Colonial Marines was not a game I had on my radar heading into PAX. I knew it existed and had been following the news revolving around the game, but it never made it to that point of excitement that say, Hawken had. That said, going in I was not expecting much. However, I was very interested in the fact that the Gearbox studio head, Randy Pitchford, would be giving the gameplay demo himself. We were all gathered into a space bunker that found itself in the middle of the show floor. There was enough seating for roughly twelve people in the bunker for the fifteen minute gameplay demo. Right from the start I knew that Pitchford was in love with what his studio was creating. Aliens: Colonial Marines would be a direct sequel to the original films and I could tell he was proud of it. Pitchford also made it known that he would be implementing features that fans wanted such as split-screen cooperative play. Before starting the demo, Pitchford stated that "Aliens has always been about the environment and we needed to capture that aspect". Aliens: Colonial Marines is running on a brand new "next-gen engine" with "some spectacular lighting effects" that will create an environment true to the series. Gearbox Studios is really striving to make this the Aliens game for its fans.

[The is a demo of a pre-alpha build]

[Below impressions are based upon a PC build*]

As the demo started I was unimpressed. It started with the typical "go in and find out what happened" order given to you by your superior. Facial animations looked rough and movement was chunky but I was willing to overlook it because it was just a pre-alpha build. I was also unimpressed by their new engine. Do not get me wrong, the game looked good but for a new engine running on the PC behind me, I expected more.

Our character was sent along a skybridge to the Sulaco (Aliens fans will be familiar with this ship). We were tasked with finding the ships flight recorder and to escort the remaining crew members from the ship. The skybridge was riddled with corpses of fallen comrades and their spilt blood. Our character worriedly speculated to himself about what happened. Most first person shooters throw you in a mute and emotionless character and it was a nice feeling to play as a character with a personality. The great part was that Gearbox did not overuse the character's voice; it never felt forced. You will be playing as a friend and fellow marine to the other soldiers and without having a personality, the connection would have been ruined.

We quickly passed through the skybridge and met up with the remaining crew members of the Sulaco. They were all gathered in the chamber that the battle against the Queen took place in. Little touches like this really solidified the Aliens environment.

Upon entering the Sulaco, I finally could see why Gearbox had been touting their new engine: everything was beautiful. Fire crackling and lightbulbs flickering on and off cast realistic shadows and really brought the Sulaco to life. I was lost in the beauty of it all until we approached our first door and "Hold SQUARE to open" appeared on the screen! This demo was running on the Playstation 3 in real time and I had thought it was running on a PC! Throwout everything I said before. Animations were still stiff but environments looked gorgeous. Knowing that the game was running on a PS3 changed my opinion on everything. It still amazes me how beautiful the game was. It is not as great as a PC playing Battlefield 3, Crysis 2, etc. but for a console game in pre-alpha, I was blown away.

[*Impressions are really based upon a console build]
We progressed past the door and into a part of the ship overgrown with Xeno-Crust (some sort of vine-like substance similar to infected sections of Dead Space). There were corpses riddle throughout the crust with holes in their chest (obviously from Chestbursters). I could tell our character began to feel nervous as his breath deepened along with a few remarks to his commanding officer. We continued down the passageway until finally reaching a surviving crew member. As we began to slice him free from the crust, our first Xenomorph crawled its way down from the top of the screen. I was expecting to be startled by the alien's first appearance but it crawled its way onto the screen so slowly that only someone completely oblivious would have been shocked. 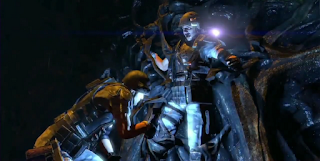 We were forced to briefly leave our suspended comrade to fight off our first encounter with a Xenomorph. This type of alien was extremely fast and used cover to its advantage. We were forced to pull out the iconic motion sensor to track its movement. The alien jumped from cover to cover only allowing us to get in a shot or two before it scurried away. After a few attempts of trying to strike us, the alien was defeated. We made our way back to our fellow soldier and cut him free and continued on our mission to obtain the flight recorder. 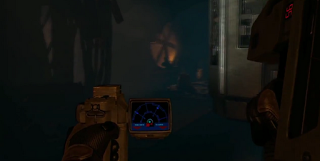 The recent commotion seemed to have alerted other aliens in the vicinity because from here on out we were in a constant struggle to make our way to the flight recorder and back to the skybridge. Aliens began crawling in from the walls and ceiling but were quickly greeted with death from our machine gun. There was a sense of urgency and suspense the entire time even though I was viewing the gameplay from the audience. The dark and eery environment of the Sulaco combined with the horror of Xenomorphs is a fantastic combination and one Gearbox nailed perfectly. I can not wait to experience this first hand when the game ships. 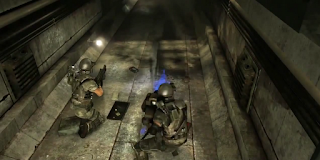 After a few rooms of fighting off Xenomorphs, we finally got our hands on the flight recorder. The feeling of accomplishment did not last long as the aliens began breaking through the glass of our safe haven. We grabbed the flight recorder and began making our way back to the flight deck. We made our way to a cross section of hallways before stopping to highlight another welcome feature of the game. In certain sections, deployable turrets will be made available to hold off advancing aliens. We quickly set up a turret facing down the two side hallways and we positioned our aim down the third. It was not long before the aliens began crawling around the corners. Just before we were overrun, we grabbed a deployable turret and detached the machine gun. From there it was an easy walk back to the flight deck.

Once we made our way back to the flight deck the battle was not over. Aliens began entering in from all corners of the large room. It was our job to hold them off as the remaining crew members evacuated and what better tool to use than the Smart Gun. We slowly started getting situated with the gun and flipped down the eye-piece. From there out there was nothing but alien destruction. Our Smart Gun quickly locked onto advancing Xenomorphs and easily annihilated them. It was not long until the room was clear and we began heading back to the skybridge.

Everything looked like it would end well, but it never does. Upon entering the skybridge, one of our fellow soldiers began screaming and collapsed to his knees. He pulled out a grenade just as a Chestburster sprang out. The surrounding glass windows began to shatter as the bridge blew to pieces. We quickly grabbed onto the side of the bridge as outer-space began sucking our oxygen, people, and bits of metal by our head. We began climbing up the now vertical skybridge in what was described as "Uncharted in space".

Unfortunately that is where our demo ended. I was amazed by how a 15 minute gameplay demo pushed a game I was very "Meh" about to a top contender for the plethora of games releasing this fall/winter. Stay tuned for my Multiplayer Preview that will be up in the coming days. I can not wait until Aliens: Colonial Marines launches this winter.

How about you? How are you feeling about this new entry in the series?