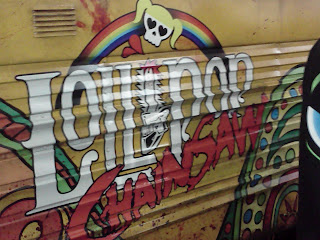 This is my very first article for A.T.G. which already makes this a special article in my heart. But, there is another reason why this is special to me. My first article is about the Lollipop Chainsaw demo I played at PAX East 2012! I am a huge Suda51 fan and playing this game along with meeting my favorite developer Goichi Suda himself made me smile like a giddy school girl. Well speaking of school girls, let’s talk about Lollipop Chainsaw.


After waiting in line for two hours I finally got to step into the magical school bus of rainbow-spilling decapitations, spectacular cheerleading melee combat, and one zombie hunting cheerleader named Juliet Starling. While in the bus I got to play five minutes of a level taking place inside of San Romero highschool. The demo started with me controlling Juliet as she walked into a classroom full of students. The camera works its way from the back of the class towards the front until finally revealing a not-so-friendly looking zombie sitting at the front desk. This zombie-teacher notices Juliet and commands the classroom full of zombies to attack. This is where the action begins.

While slicing through the zombies with my chainsaw I could not help but feel the similarity in combat with two of Suda51’s previous games: No More Heroes and No More Heroes 2: Desperate Struggle. This got me excited. There are some changes to the combat but they are for the better. Juliet can swing her chainsaw similar to Travis’ beam katana (from No More Heroes), but Juliet can do so much more than that. Juliet can stun zombies using cheerleading moves which opens up special chainsaw combos. During the special, a quick cinematic poses Juliet decapitating multiple zombies while rainbows and stars flow from their bodies. Another thing that Juliet can do that Travis could not do is jump. I know that in No More Heroes 2, when playing as Shinobu, you could jump, but Juliet is much better at.

After slicing my way through the class of the dead, the zombie teacher calls for assistance from the hallway. After much slicing, cheering, combo killing, and rainbows, I finish off the second batch of zombies. The camera cuts to the teacher as he dives out the window instead of fighting Juliet.

Following the fight, Juliet leaves the classroom and sees a group of zombies killing her currently (but not for long) living classmates. Juliet is tasked with saving the few classmates that are left. As I swing my chainsaw and cheer around, I’m suddenly forced back into reality when I hear the booth people behind me say that it is possible to slice off your classmate’s heads if you’re not careful. Then immediately back into the game. I spend the next few minutes saving my fellow classmates in the halls and in other classrooms. As I enter the last classroom I see zombies feeding on a helpless girl on a desk. The zombie teacher from earlier decides to return and crashes through the window into the classroom. I now have to fight a bunch of normal zombies and what I might call an upper level (but not boss) zombie. The teacher grabs a cabinet and starts swinging it around trying to kill me as I quickly take care of all the normal zombies. Then it is just Juliet and the teacher. Slicing the cabinet enough wears it down until the teacher can no longer wield it. With no cabinet to hold me back, I can start doing real damage to the teacher. With some cheering and slicing combos I kill the teacher zombie.

As soon as the zombie-teacher is dead (again? more? permanently!) a cut-scene is triggered. Out in the hallways we see a zombie walking with a bomb strapped to its chest. The zombie explodes, creating a hole in the wall, allowing Juliet to move into the next area. After jumping through the hole, I notice two officers being overrun by zombies. Just as I start to run to help, a bus crashes through the wall blocking my path. Without a choice, I turn around and run in the other direction.

I can now see an opportunity to cut through some broken wall left by the bus. On the other side of this wall is a headless, glowing, blue zombie. Juliet tells the hanging head of her boyfriend, Nick, attached to her waist, that she needs his help.

Unfortunately that is when my five minutes were up and I was forced to leave the bus.

After the demo, I can truly say this is one of my most anticipated games of the year. Suda51 has a truly gifted (yet sick) mind and I have become a loyal fan with only the goal of playing though his next game. Oh and also my favorite piece of swag came from Lollipop Chainsaw!