I know that Asura’s Wrath has been out for almost a month now, but this week I finally was able to pick it up and play through it. Know this before reading further, this is not a review for the game. I will give my opinion and ideas of it but I didn’t play the game even thinking I’d be writing about it. I will try to keep this as spoiler free as possible, because I hate spoilers. 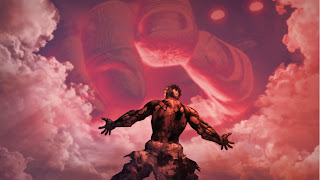 I first noticed Asura’s Wrath at last year’s E3 when they showed the insane trailer of a normal sized man with 6 arms rapidly punching the finger of a man larger than planet earth. My first thoughts were, “This is Amazing!”. And then I kind of forgot about it until I picked it up earlier this week. The game isn’t very long, I finished it in six hours, but that doesn’t take away from the game at all. Actually I kind of feel like it was good that it was not very long, ill explain later. The action in the game was a mix between a beat-em-up, an on rail shooter, and a timed button press game, or quick-time-events (I am a huge fan of timed button pressing). All of the combat had its ups and downs but ultimately I enjoyed each section.

This game took everything insane, outrageous, glorious and awesome about anime and made it playable. I love anime and manga, so playing Asura’s Wrath was like a dream come true. The fight in the trailer is a great example. Fighting a man larger than the planet you are standing on is quite the sight to see. The game plays in 18 episodes, similar to anime. Most episodes can be finished within a half hour. This contributes to the six hour total game time to finish it but again I think this is a good thing. Some of my favorite anime have been short series. Baccano, FLCL, Afro Samurai, are just a few examples. They are wonderful series that didn’t need to go any further, in fact going further could have possible damaged the series (coughBleachcough). I pictured Asura’s Wrath as a playable anime the entire time, therefore I was ok with the short game span. The graphics had a very strong anime vibe to them which I fell in love with. The entire game all I kept thinking was that more anime should be done with graphics like this.

Anyway, this is a game that I believe anime fans would enjoy and I personally am glad that I could cross it off my list of want to play games.

Hey I’d love to hear your opinions, what did you think of the anime feel?