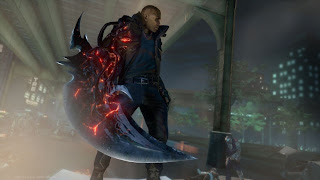 I had picked up the original Prototype on release day but after beating the game, I traded it in. It is not that I didn't like Prototype, I mean its pretty much Grand Theft Auto with super powers but that also means that I cant help but compare it to the amazing inFAMOUS series. I was excited to pick up the sequel to if it made improvements from the first game and I have to say, it was much better.

When you start a new file in Prototype 2, there is an option in the main menu to watch a quick recap of the original game. I did not remember much of the first game so it was a nice feature.
The opening cinematic of Prototype 2 was awesome. It mixed in game and live action shots from actual riots. All of which lead up to a first person perspective clip of James Heller returning home to his slaughtered family. After that, a revenge filled Heller requests to get sent to the "red zone", the most dangerous area of the infection. The army deems Heller as unfit to fight and is discharges him. A short message makes its way across the screen stating that there are not enough soldiers. Heller is accepted back into the army and sent into the red zone. Heller's company makes its way through the red zone in a tank. It took a while to notice, but most cutscenes in the game are in black and white except for the color red. This was an awesome look that really added to the emotion behind the game.

As soldiers in the tank talk, different scenes of New York are shown that display how the city is being affected. It is not long until a car flies into the tank, killing everyone except Heller. As Heller crawls out of the tank, he notices Alex Mercer (who you played as in the first game) searching a body. Heller draws his knife and sprints at Mercer, successfully stabbing him multiple times. Mercer breaks free from Heller and begins fleeing down an alleyway. While chasing after Mercer, you get attacked by a brawler, the basic infected enemy. After stabbing the brawler to death, a sixty foot tal infected starts charging towards Heller. Heller manages to escape from the giant infected but runs head on into Mercer. Mercer infects Heller with the virus, leading us into the real Prototype 2 experience.

I thoroughly enjoyed the first ten minutes of the game. Fighting the infected with only a knife was very exciting. After being infected, you wake up with the super strength, speed, jumping etc. you are familiar with from the first game. It takes a little while before you actually get powers outside of consuming and disguising as people. As soon as you get your powers, it almost feels like the same game as the original.

Prototype 2 brings new enemies to fight and new abilities but not much is different than that. I did enjoy new "Evolved" enemies. Evolved enemies have some of the same abilities as Heller and Mercer which leads to some of the best fights of the game. I enjoyed the new fights but I did not feel as if they were enough to make this feel like a "new game".

Heller feels extremely similar to Mercer but actually has a personality. Heller has a wicked attitude and only cares about avenging his family. He sympathizes with few people and becomes a unique character that you actually care about and want to help. 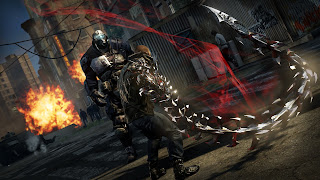 Though the game is much better than the original, I was pretty disappointed about how little was changed. Then again, if its not broken why fix it. The changes were enough to make it better than the first and I was glad about it.


Anyone else pick up the game yet? Anyone think it was good? I'd love to hear your opinions!

Email ThisBlogThis!Share to TwitterShare to FacebookShare to Pinterest
Labels: 2, prototype