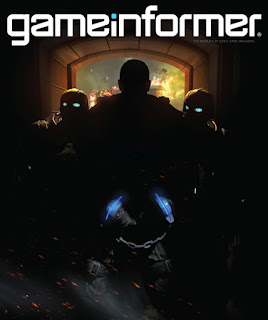 The next title in the Gears of War franchise will be featured in July's issue of Game Informer.

[Spoilers if you haven't played the series]
The cover teases a silhouette of Marcus in handcuffs, hinting that the game will be a prequel to the original Gears of War. Prior to the Locust invasion, the humans had been in a constant struggle over immulsion, the power source of the planet. The Pendulum War, as it was called, ended only weeks before a greater threat, the Locust, united the humans under one cause.

The above image has Marcus being escorted to prison while Reavers attack the city in the background. Marcus was sentenced to jail for disobeying direct orders while attempting to rescue his father from his chateau shortly after the Locust first launched their attack. I can see the story of the next Gears of War game following Marcus through the Pendulum War up until the Locust invasion and ending with him being thrown in jail.

The full reveal will be during Microsoft's E3 press conference next week.

Email ThisBlogThis!Share to TwitterShare to FacebookShare to Pinterest
Labels: 4, gears, of, war